This is another type of digital art I’m doing now.

I’ve been using this as an all-purpose blog for art, commentary and a place for a continuing story of small town newspaper correspondent, but I decided to move all of the news about Walnut Shade to its own blog site (walnutshadenews.wordpress.com) and use this one exclusively for art — painting, sculpture, and photography.  I hope that you will continue to visit here and to subscribe to my Walnut Shade blog.  Lots going on in that town, and I’d hate for you to miss out.

Hello Art, a local arts organization, is hosting its first member’s show at the Kansas City Arts Incubator.  It’s being called a “creative shopping experience” because all the art in the show will be for sale at reasonable prices; most pieces will be priced under $100.  The show and shopping opportunity will be this Friday, December 3 from 5:30 to 8:30 at the Arts Incubator, 18th and Baltimore.  If you are looking for a unique gift for that special someone, come down to the show.  It’s also First Friday in the Crossroads, so there will be lots of activity, with galleries open late.

Here are a few of the pieces I will be showing Friday. 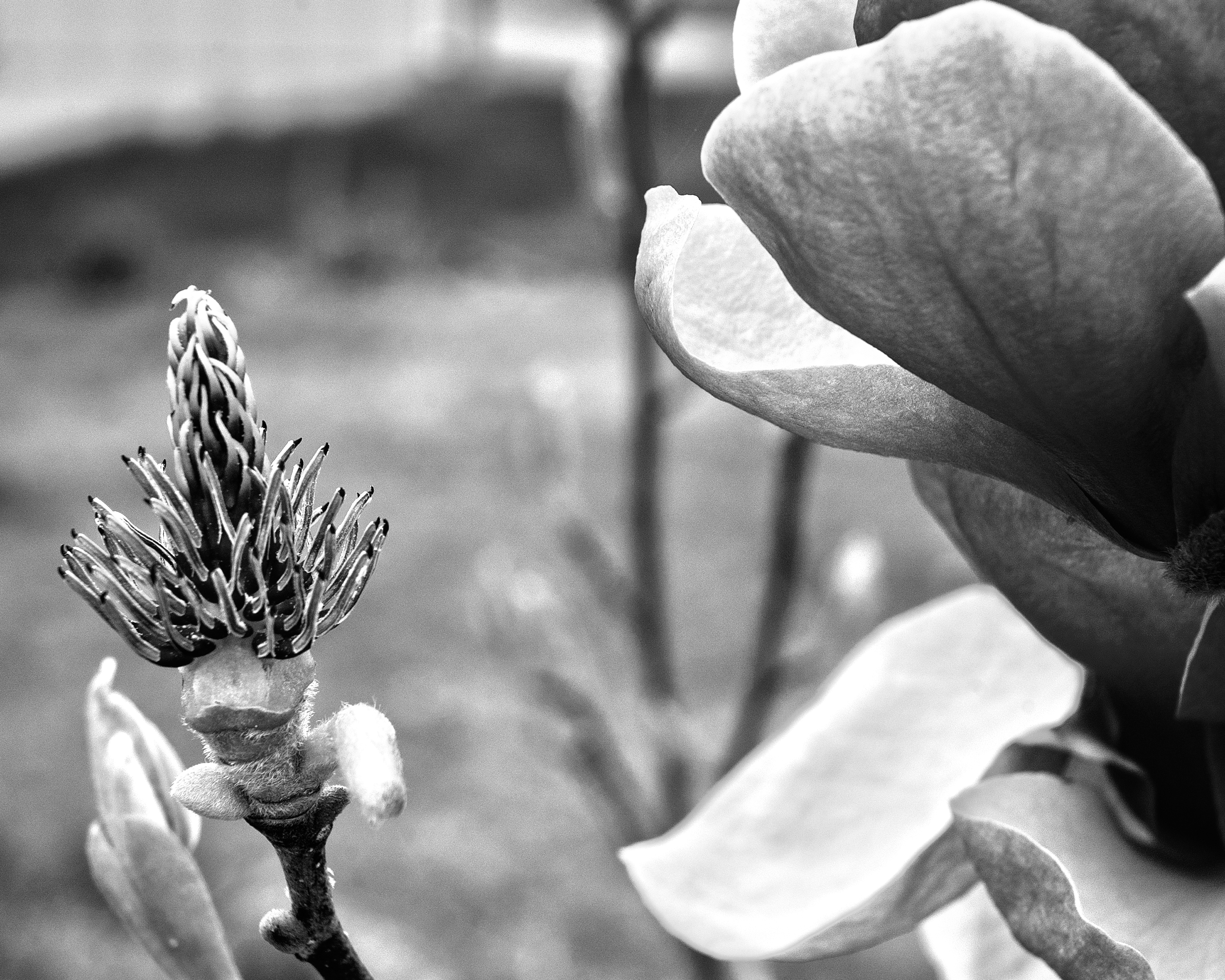 I shot this magnolia bud a couple of years ago in color, but the structure lends itself to a high resolution black and white treatment.

A daisy shot in very low light and rendered in black and white.

This railroad bridge near Liberty has interesting lines and provides a variety of textures.

A couple of years ago, Suzanne had a conference in Atlanta, and I took this shot inside the hotel we were staying in.  I liked the contrast of light and dark… and the cleaning cart in the hall.

When Suzanne got up this morning, she discovered that “Ladders” had been vandalized.  During the night, someone had knocked it over, though I have to admit, it looks like they did so very carefully.  None of the top limbs were broken and there doesn’t seem to be any damage anywhere else.  Still, it’s disappointing that this would happen.  But, given what has happened in the four years we’ve lived here, not all that surprising.

This is not the first incident we’ve experienced.  During the 2008 election, we had three Obama signs stolen from our yard and just this past March, we had a “War is not the answer” sign that we’ve had since the first days of the Afghanistan War back in 2001 taken.  I’d like to think that these are all pranks by neighbor kids, but they are irritating, nonetheless.

I reported the latest incident to the police just so they will keep an eye on things.  For now, I’m going to leave my sculpture in its “prone” position and treat it as a crime scene.  One of the things I learned last year was that these pieces evolve in the time that they are on exhibit, whether by my hand or by the hand of nature.  Now, I see that they can also evolve by the hand of others.

Construction of the Ladders structure was phase one of the piece.  The second phase has been painting and adding canvas strips. 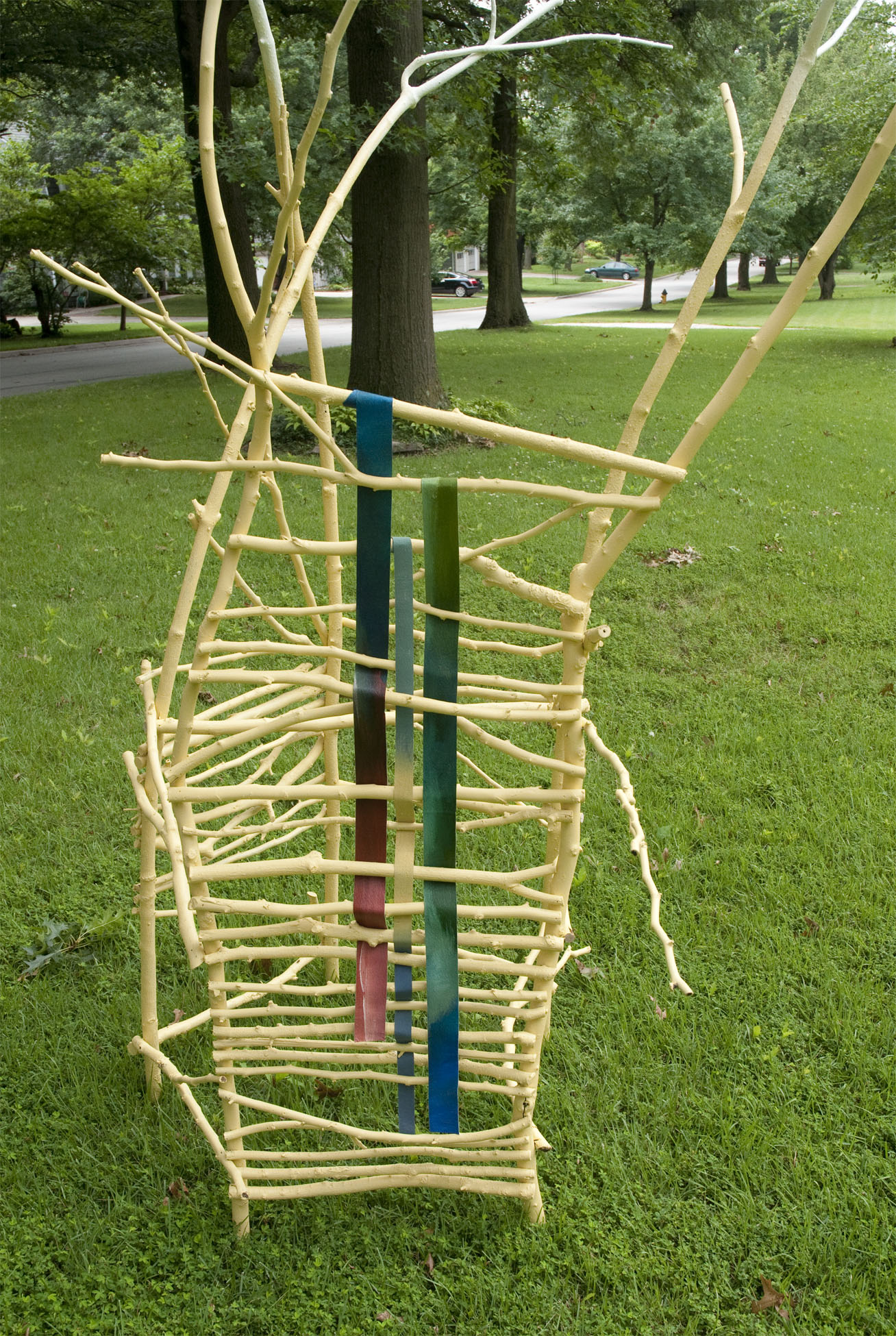 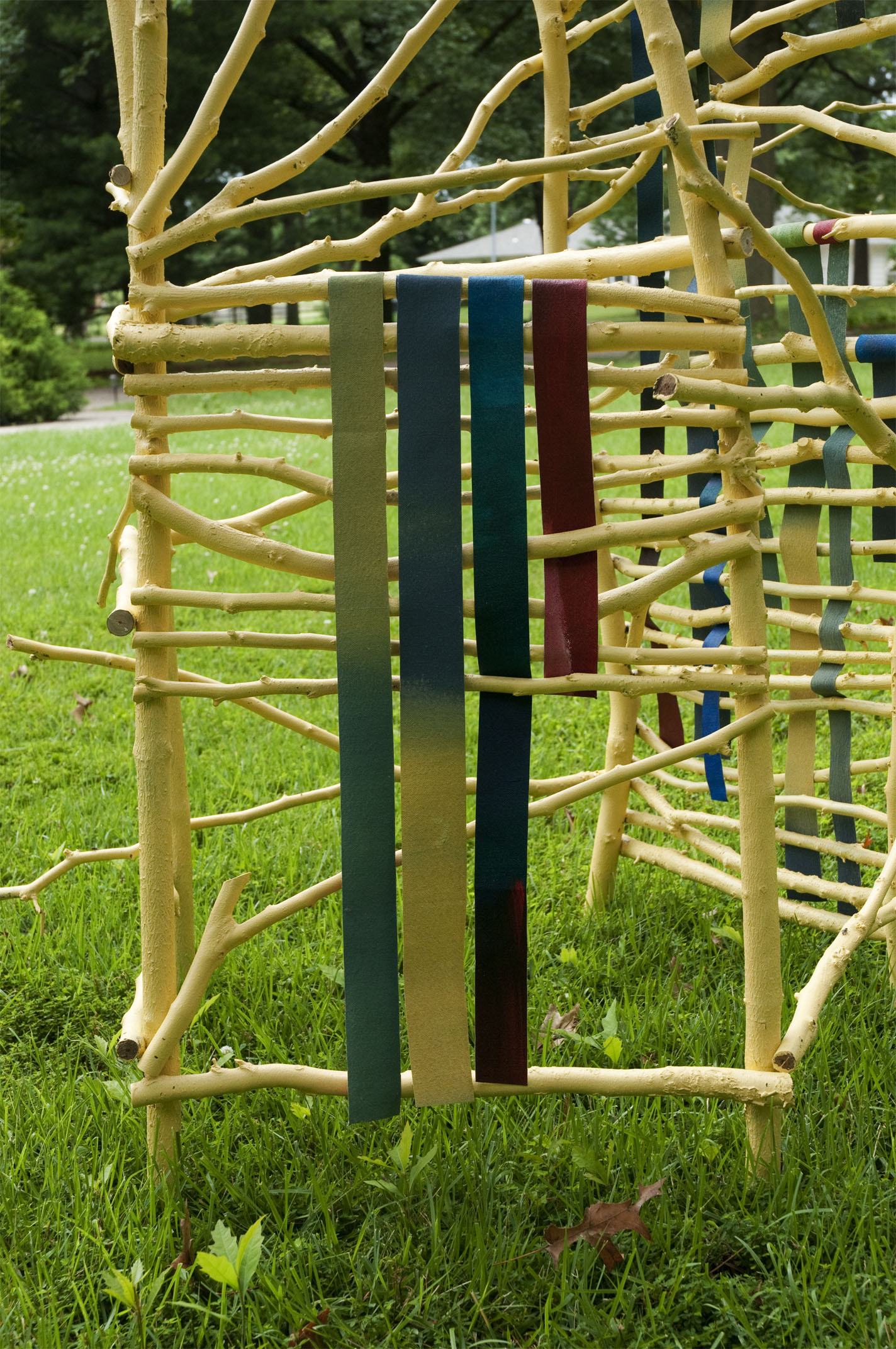 The process reminded me of the work my grandmother used to do repairing the seats of her kitchen chairs.  She lived in a small, two-room house across the street from us when I was growing up; one room was the kitchen/living room/sewing room/library and the other was her bedroom, which was just large enough for her bed and a small dresser.  My grandmother moved to her tiny house from the farm after my grandfather died in 1952.  She lived there alone for the last ten years of her life, although she was rarely alone.  As I said, she lived across the street and one of my aunts and an unmarried cousin lived next to her.  On an adjacent lot was another adult cousin and her family, so my grandmother’s house was almost never empty.  On Saturdays and Sundays, some combination of aunts and uncles and cousins always visited and my grandmother spent the rest of the week sewing and cooking in preparation for these invasions.

My grandmother had suffered an injury to one of her hips at some point, which made it painful for her to walk or stand so she spent most of her day sitting in her wicker rocking chair, cutting strips of cloth from old dresses, shirts, sheets and any discarded material she could get from the family and friends.  In addition to the chair-seats, she also used this material to weave rugs, coasters, and place mats.  The strands of material were carefully braided and sewn together, making them very strong.  My process is much more fragile and not intended to be utilitarian.

I painted both sides of a 24″ x 36″ piece of canvas before cutting it into strips.  I found that when I had finished painting, I was reluctant to cut the strips; I liked the overall piece I had done and considered stretching and framing it as it was.  However, that was not the creative intent at that point, so I went ahead with my plan and cut the canvas into strips of varying width.  I forgot to take a photo of the intact piece.  Probably just as well.

With the exception of some touch-up painting of the structure, I have one more process to add to the piece.  I’ll share that with you in a subsequent post.

I began working on my new organic sculpture this week and plan to unveil it on July 4.  Our neighborhood is just a few blocks from the city park and we usually have hundreds of people parked on the streets here, so it’s a perfect venue for exhibiting my yard art.

The process this year started with the deconstruction of a couple of last year’s “Trellises.”  Here’s how one looked at the end of the season.

Here’s part of the deconstruction

and deconstruction of the canvasses that were part of the sculpture. 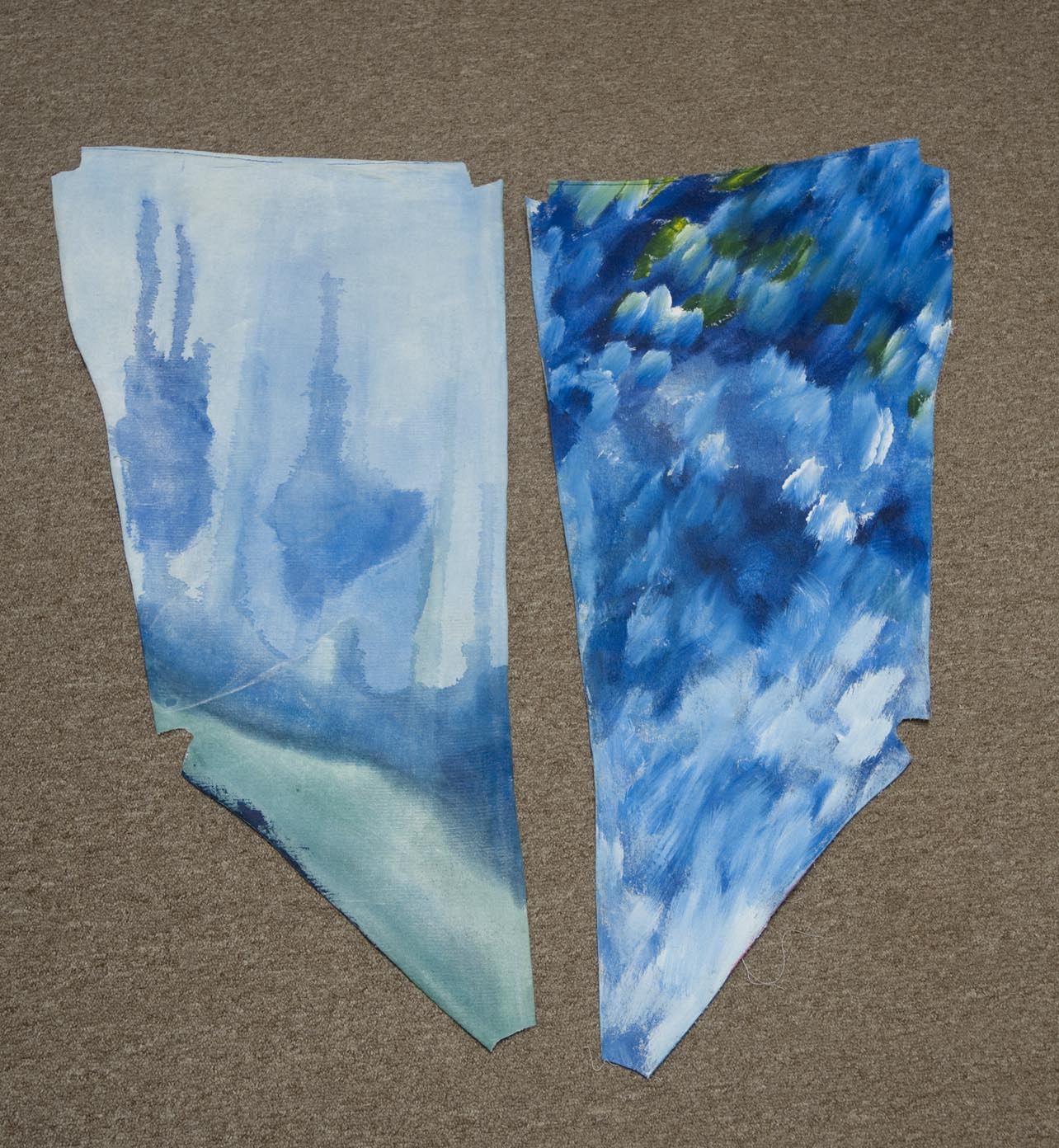 Since last year’s project started with the idea recycling of yard waste, I decided that this year’s piece should continue the recycling by using last year’s art in a new form.

After deconstruction, I started assembling the parts of the new project. 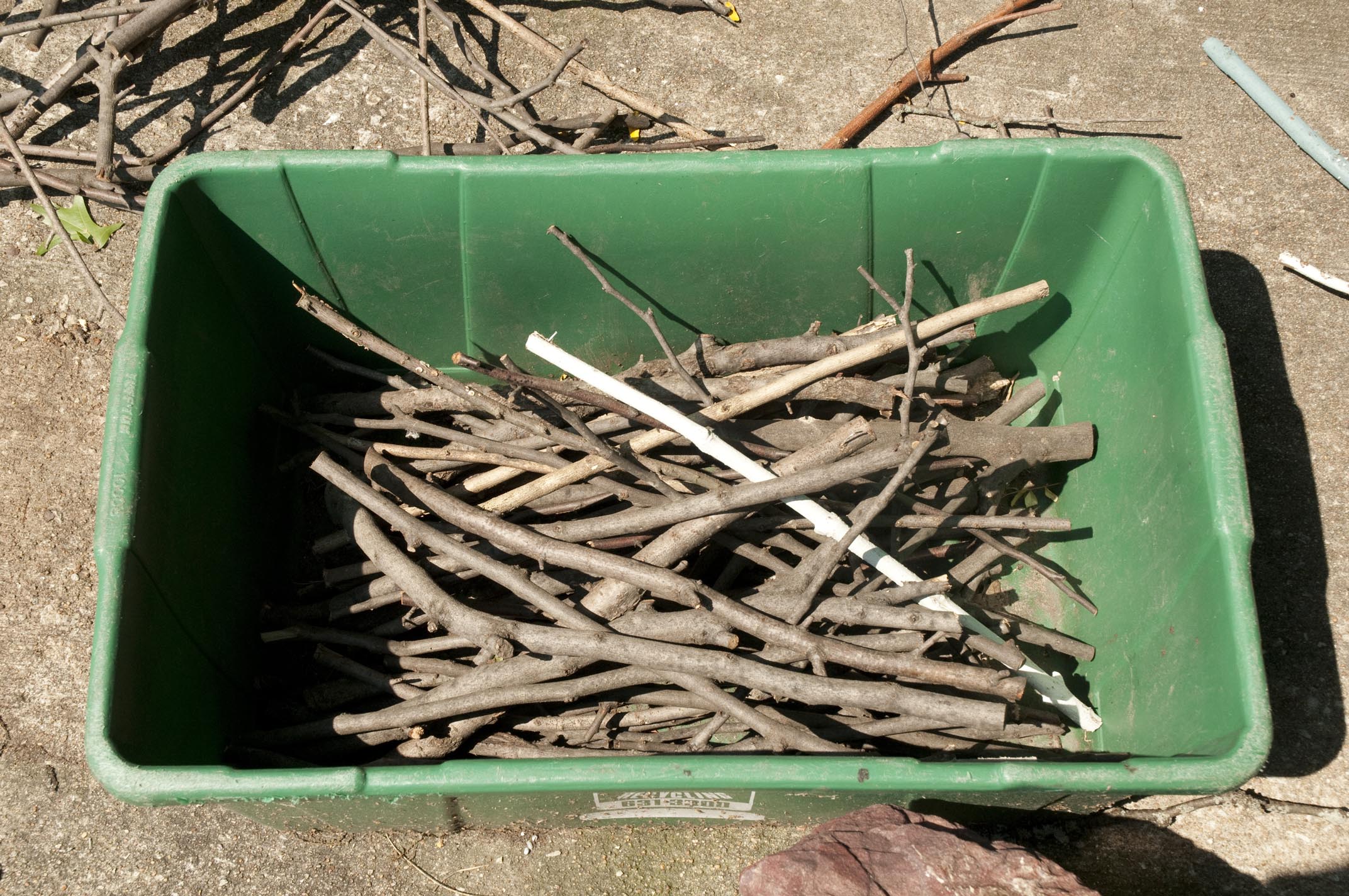 and purchased a new tool that really speeded up the construction process:  an air compressor and air gun.  It works like a charm and I’m thinking about other ways to use it. 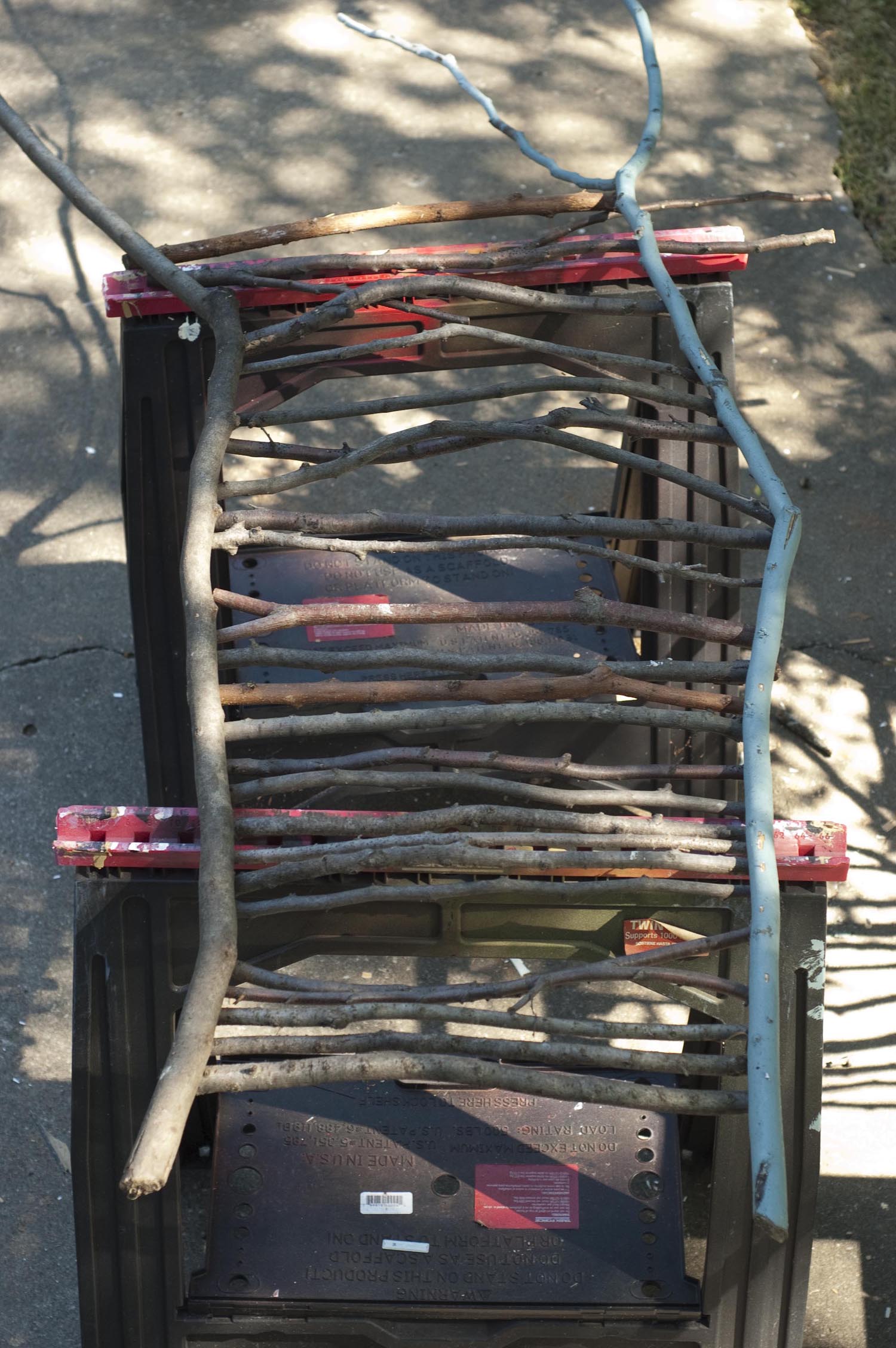 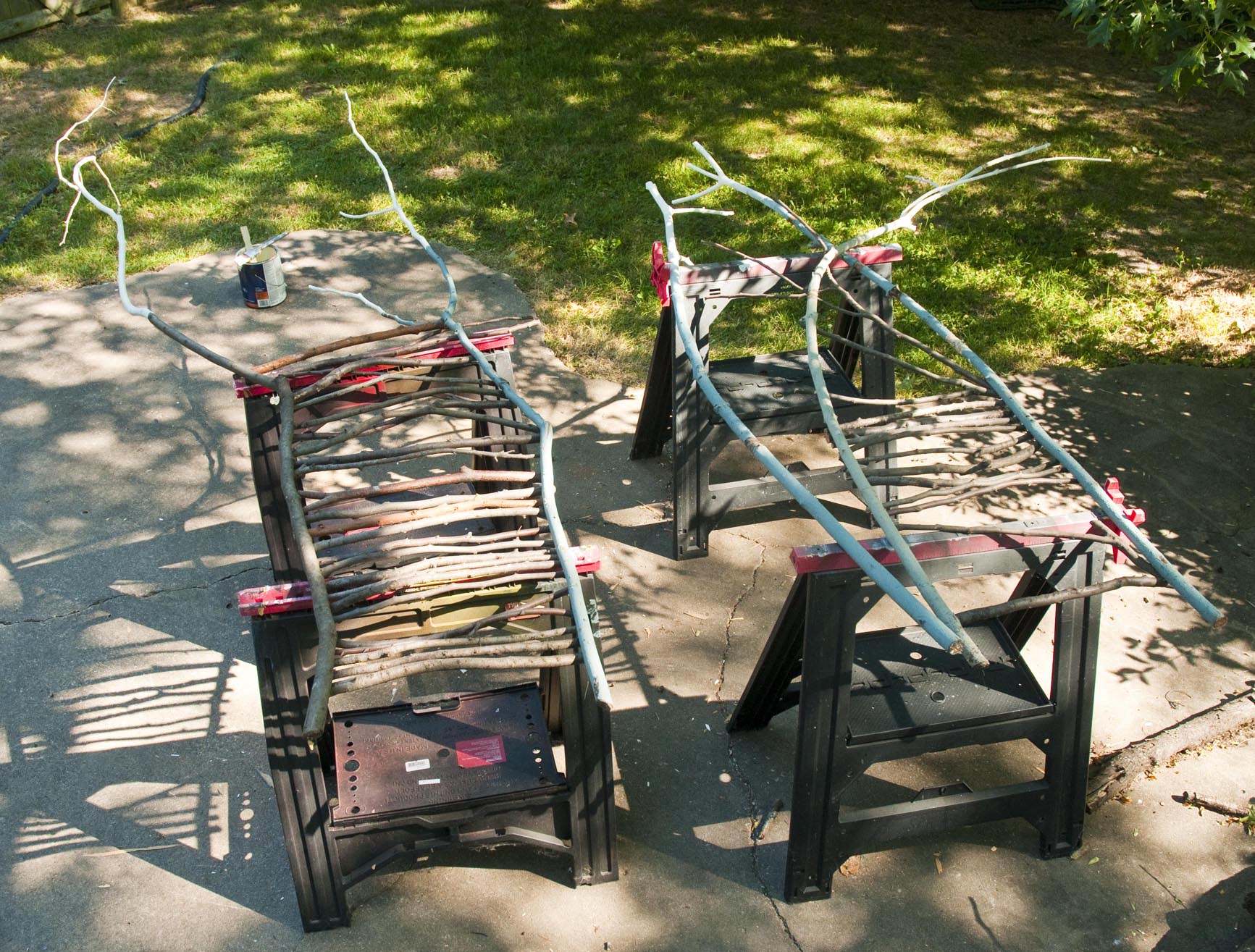 And here are a couple of shots of the completed structure. 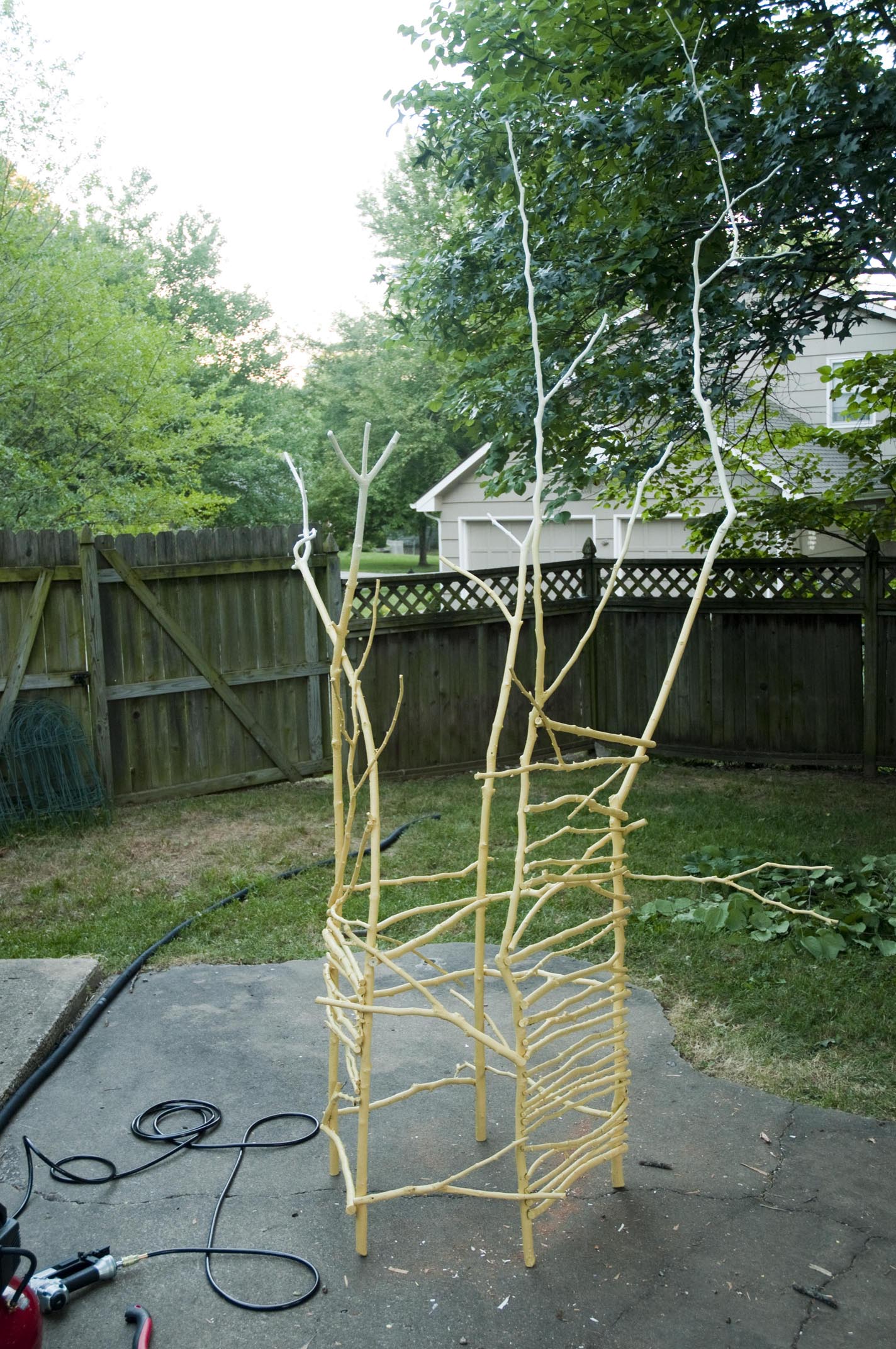 The next step is to reconstruct the canvasses and add them to the structure.  That is today’s task.  More later.

When I titled this blog “Let the waters come…” I wasn’t requesting that that happen.  But over the last few days, I’ve discovered what that phrase can mean in the real world.  Since last Tuesday, I’ve had over 13 inches of rain at my house, a good portion of it in my basement.  I suppose it’s partially my fault for not taking care of the crack in the basement wall that I always suspected was there.  The rain, and resulting mess, kept me from getting started on my latest organic sculpture, which I am hoping will be ready for unveiling on the 4th of July.  Stay tuned and ask the rain gods to hold off a little bit while I get my piece completed and installed.

Here are the final images from the Trellis Project.

The last trellis in place. 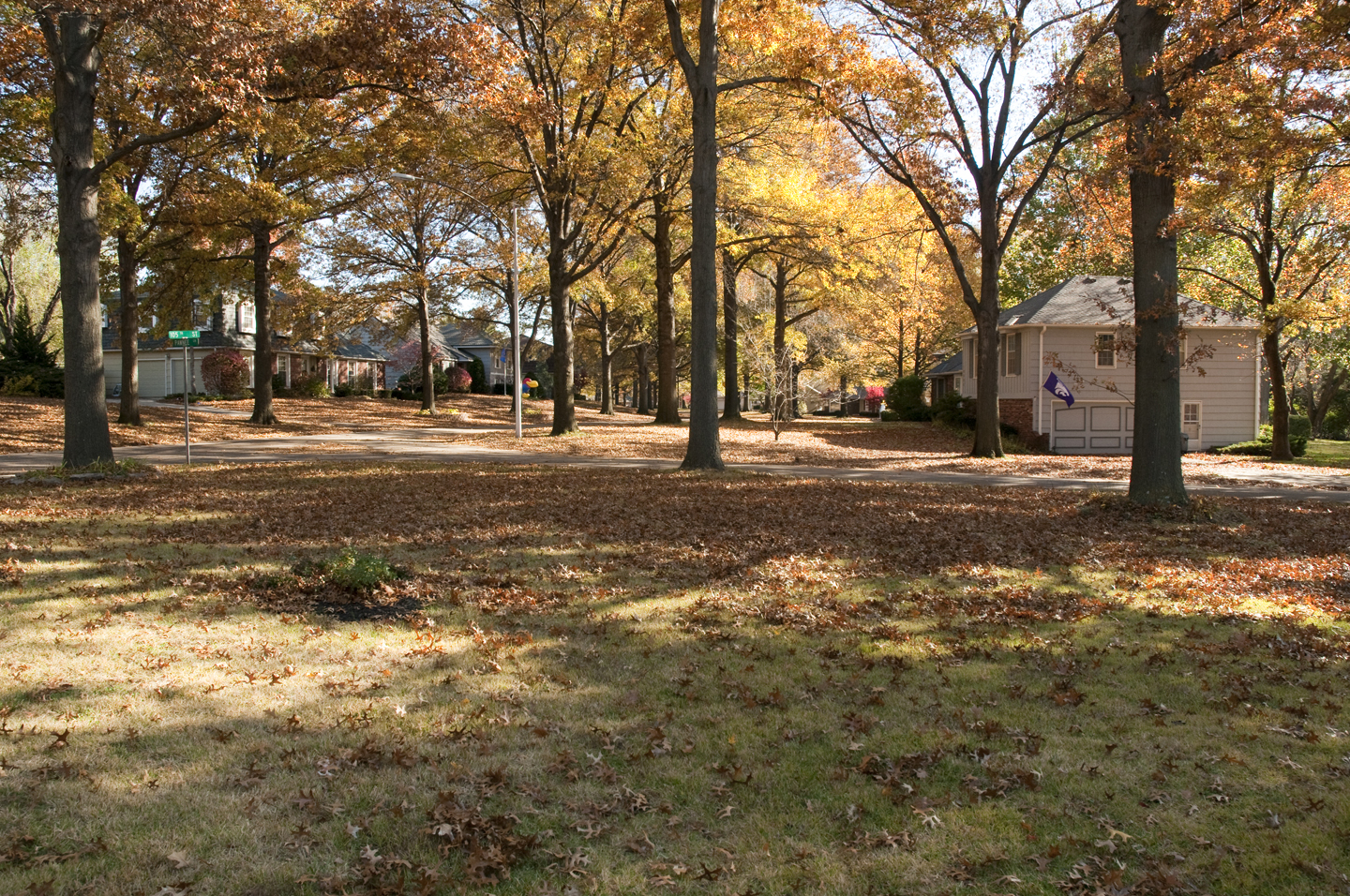 The front yard with no artwork.  But other projects are bubbling, though.

*A paraphrase of a line from ‘Salem’s Lot by Stephen King.

After nearly four months on exhibit, the trellises are coming down.  The first has been removed.  Here are day and night photos of the three, then the two. 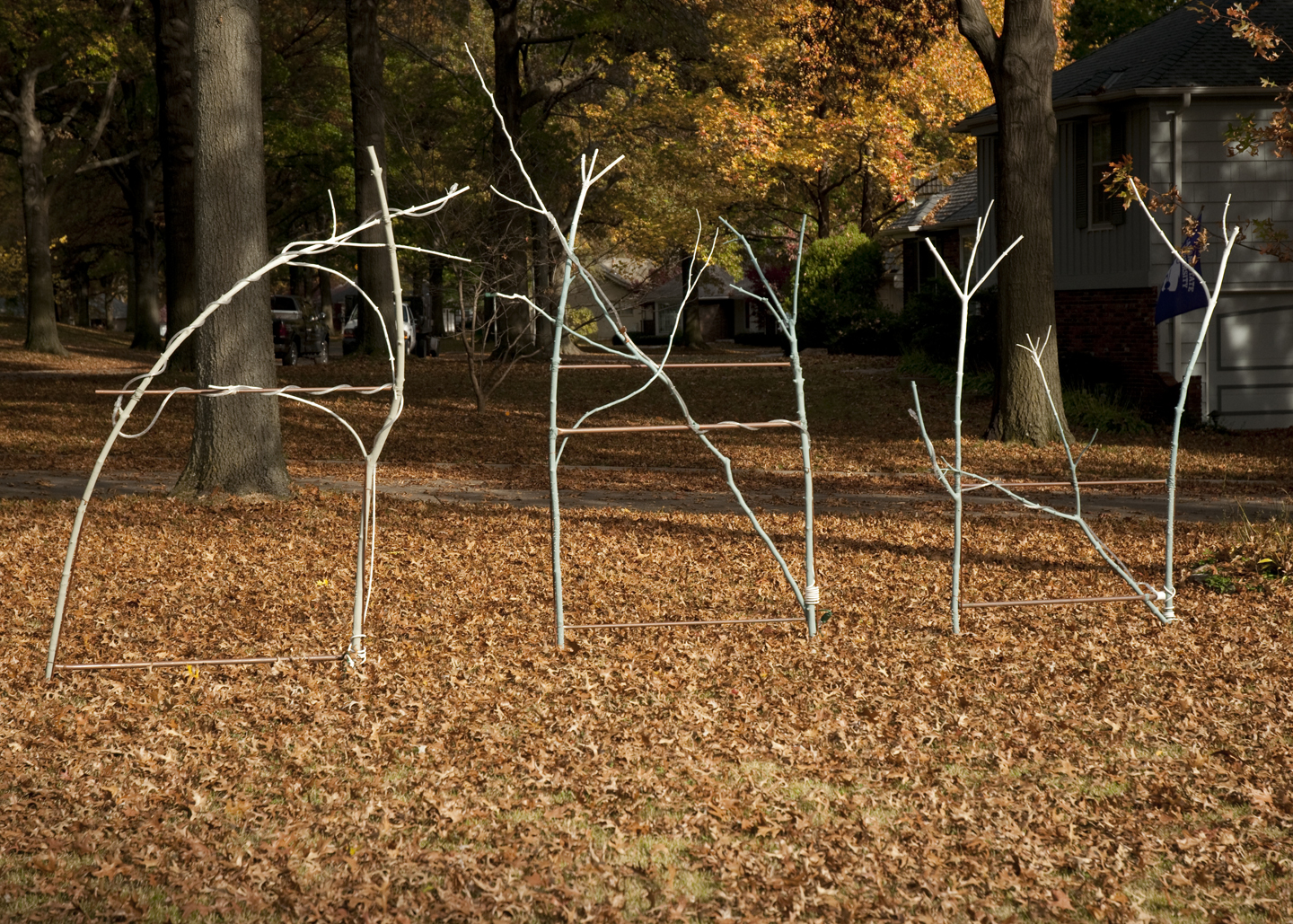 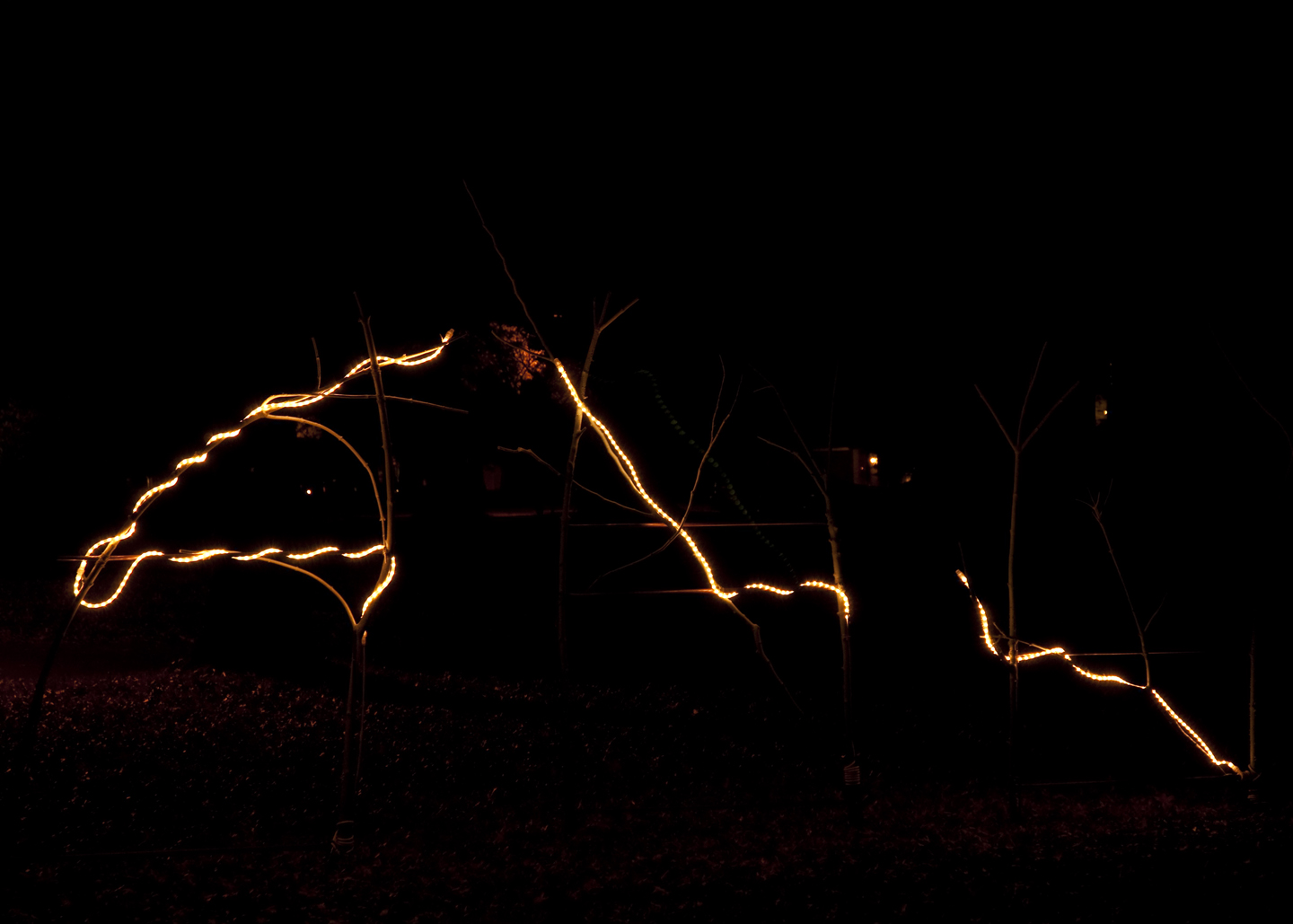 Today was the last day of the trellis project.  I removed the final canvas, though the trellises are going to remain in the yard for a few days.  We have some friends from California coming to visit and I thought I’d give them a chance to see the structures in place.

This has been an interesting experiment, not the least for all the positive response I’ve had.  Many people have come by to see the installation and several times while I was in the yard moving the trellises from one location to the next, neighbors have stopped and chatted.  One neighbor said that the trellises livened up the neighborhood and gave him something interesting to look at on his daily walks with his dog.

I had originally intended to auction the pieces off at the end of the project to benefit the Humane Society of Greater Kansas City (http://www.hsgkc.org) and Wayside Waifs (http://www.waysidewaifs.org), but I haven’t finished cleaning the canvas and so that will have to wait.  One of these days, I’ll let you know about an on-line auction, with all the proceeds going to care for homeless animals, of which there are so many that need our help.

As something of a footnote, I’ve recently been recording observations about various things and posting them here, including a combined observation/image piece which is also going to be incorporated into a mix-media piece that I hope to finish in the next couple of weeks.  If you haven’t checked the blog in a few weeks, you’ve missed them.  They follow below…