On Monday afternoon, I went to the Singer Sewing Center to see if they could open the sewing machine case.  The key had been lost during one of our moves and my attempts to open the case had proved unsuccessful.

At first, it looked like I was going to be out of luck there.  The owner said she didn’t think they had a key, but an associate came out of the back and said, “I think we’ve got one.  Give me a minute.”  I could hear him rummaging around and in a bit he came out with a tiny piece of metal that was, indeed, the right implement for the job. After he had opened the case, he checked the machine out and told me how to open it once I got it back home.  Fortunately, I had the right size screw-driver and that issue has been solve.  Here’s a photo of the machine and case. 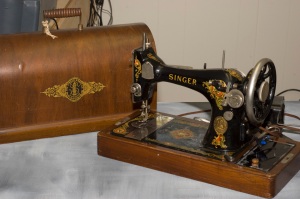 On Monday night, I had to do some repair work on the machine.  When I uncoiled the electric cord and cord to the foot-pedal, they broke in several place, being very brittle.  Here’s photo of the part of the cord I had to repair and a shot after the repair. 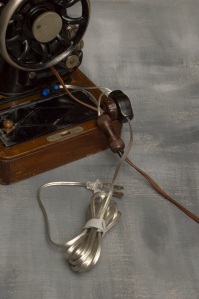 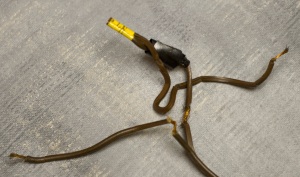 Last night, I asked Suzanne to help me set up the machine to use and after a bit of fiddling, she decided that she didn’t remember how to put all the pieces together.  She couldn’t remember the last time she’d used it, thought it was probably right after college, the sewing machine having been a gift from family friends.

Since there was no manual in the case, I turned to “the Google,” as our not-at-all-dearly-departed ex-President would say and went to the Singer Sewing Machine site.  What an amazing place!  Singer has been in business since 1851 and they have incredibly complete records back to the 1870s.

It appears that, Singer shipped the assembly of this model to Quebec in 1924, but Elizabeth, New Jersey must have been the center of production for Singer in the United States until the 1930s.  They also built their early machines in Podolsk, Russia; Wittenberge, Germany; Clydebank, Scotland; and, Bridgeport, Connecticut.  In the 1920s, Singer expanded it’s manufacturing process to Pakistan, Colombia, Turkey, Argentina, Philippines, Italy, Taiwan, Brazil, France, Peru, Japan, Australia, Chile, and Mexico.  Today, sewing machines are manufactured all over the world.

I was able to download a copy of the manual for the sewing machine and will be trying it out tonight.

2 thoughts on “A little bit of sewing machine history”