Each year, the Good Samaritan Project of Kansas City holds a benefit auction called Corks and Canvas, to which I always contribute a piece of my art, usually a painting.  This year, I’ve decided to donate an organic sculpture and I thought I’d recount the process.  Here’s a photo of the piece to date: 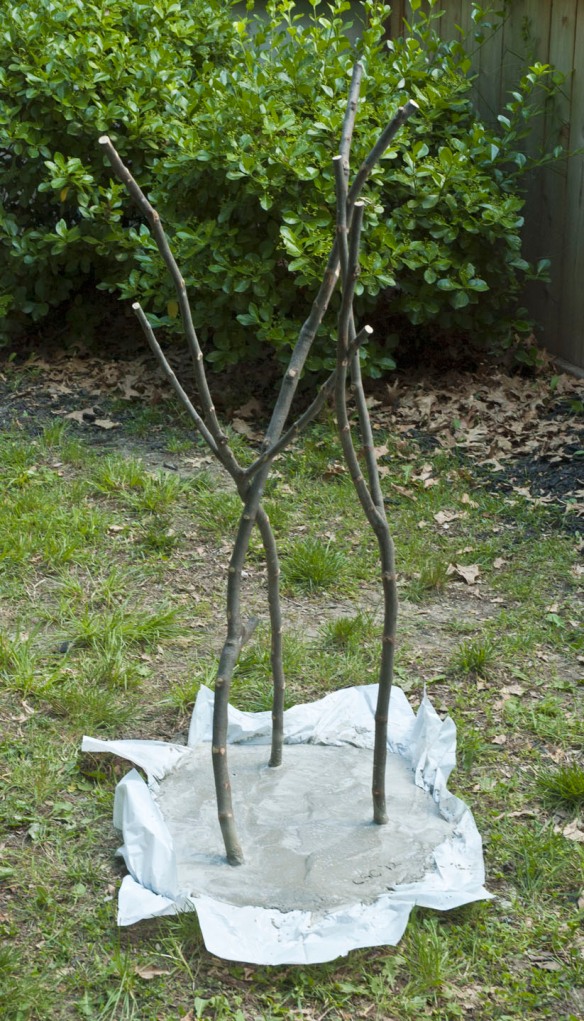 OK, I know it doesn’t look like much, just some sticks stuck in… what?  Yes, it’s just some sticks stuck in concrete.  Let me explain.  My organic sculptures are created from limbs I trim from the the trees and bushes in my back yard.  I combine them with different materials to create the sculptures.  Here are a few photos of other pieces I’ve done.

So, here’s what I’ve done so far on the piece I’m calling Arlene was not convinced that Jeffrey was really the Green Hornet’s cousin:

Step 1 — I collected limbs that looked like they would give me an interesting shape.

Step 2 — I trimmed and sanded any knots.

Step 3 — I tried various configurations of the limbs and when I found the grouping that I liked, I connected them first with wire and then with screws to make a stable, solid structure.

Step 4 — In order to make the piece more stable, I decided to encase the base of the limbs in concrete.  I gathered some chicken wire and other types of wire to strengthen the concrete and bent them in to a rough shape for the base.

Step 5 — Next, I dug a hole a bit larger than the wire base and about two inches deep.

Step 6 — I lined the hole with garbage bags in order give the bottom of the base a smoother surface.

Step 7 — I decided that the concrete base should sit just off the ground (or floor, if the purchaser decided to display the piece inside), so I removed the garbage bags and dug three shallow holes, about 1/2 inch deep to accommodate some rounded rocks I collected.  I replaced the garbage bags, placed the three round rocks in the holes and put the wire mesh in the hole.

Step 8 — I placed the connected limbs in the hole on top of the garbage bags and mixed some QuikCrete (a quick-setting cement mixture that is often used to set fence posts; it usually hardens within about an hour).

Step 9 — When I poured the QuikCrete into the hole with the wire mesh and limbs, I could tell that I had used too much water and that I did not have enough QuikCrete to fill the hole (this is always a trial and error operation).  Having purchased only one bag, I drove to the local hardware store and bought another bag.  Fortunately, the hardware store is only about six blocks away, so the QuikCrete hadn’t hardened and I was able to add enough to fill the hole and take up the rest of the water.

Step 10 — I smoothed the cement and went inside to have cup of coffee, leaving the piece to begin the drying/hardening process.  From start to finish, it had taken four hours to get to this point.

That was all yesterday.  Today, when I checked, the cement had hardened, but I’m going to give it a couple of days before digging it out of the ground.  In the mean time, I’m working on other parts of the project.  I’ll document those in the next few days.